Indonesia detained two South Korean ships on unclear grounds, and is keeping them in detention, anchored in Singapore Strait waters between Indonesian islands Bintan and Batam. LPG tanker DL LILY was seized on Oct 9, while en route from Port Klang to Singapore, and is kept since then at her present position. Bulk carrier CH BELLA was seized on Jan 11, NW of Bintan island, where she anchored on Jan 9 shortly after leaving Singapore. Indonesia says both ships were seized for violating nation’s border and sailing into territorial waters. Crews of both ships are restricted in their movements and remain on board, it is said, that the supplies like food and water are regularly replenished.
What it’s all about, is absolutely unclear. Indonesia may seize half of Singapore Strait trafficking ships, if applying that “territorial waters violation” rule in full. What’s the meaning of it? What’s the purpose? Malaysia is regularly detaining foreign ships for allegedly, unauthorized anchorage, so often that this violation may be considered as a source of income for Malaysian budget. Indonesia found this innovative scheme useful and worthy of implementation?

Jan 17 UPDATE:
LPG tanker DL LILY, held in detention by Indonesian authorities for about 100 days, was released on Jan 17, understood after South Korean Ministry of Foreign Affairs intervened and demanded the release. The ship is to be docked at Singapore, for further investigation. As of 1500 UTC Jan 17, tanker entering Singapore.
Bulk carrier CH BELLA remains in detention, Korea continuing talks with Indonesian Naval Command, to facilitate bulk carrier release. 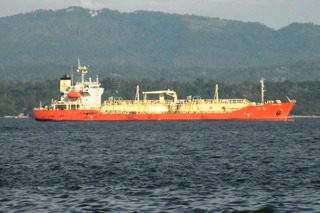