General cargo ship ARKLOW DAY left Aviles Port, Asturias, northwest Spain, at 2010 UTC Dec 9 after offloading cargo of slabs. Shortly after leaving the ship encountered rough seas of Biscay with waves up to 9 meters high. Stray wave broke the bulkhead of the compartment where five crew were located, seriously injuring all five, including wounds inflicted by steel pieces of shattered parts of the compartment. Reportedly, they suffered wounds all over their bodies. Maritime Rescue Helimer Cantabrian helicopter was sent to evacuated wounded seamen, after two hours of highly professional performance in very challenging conditions, rescue team managed to airlift them, and transfer to hospital.
The remaining five crew took the ship to nearest port, El Musel, Gijon, where she docked at around 0030 UTC Dec 10, and as of morning Dec 10, remained in the same position.

Update: Most probably, 5 crew were on deck in the open, and weren’t able to avoid mass of water sweeping everything on its’ way, when stray wave hits the ship. They were dragged along and beaten against steel parts of deck and other items. 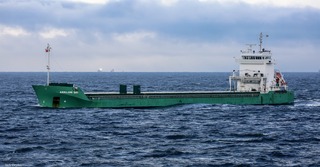