15.5 tons of cocaine seized on board of MSC GAYANE

US federal agents seized 15.5 tons of cocaine on board of container ship MSC GAYANE at Philadelphia USA, on Jun 17, shortly after her arrival. Understood cocaine was hidden in one container only. At least two crew were arrested, second officer and a seaman. The ship last port calls prior to Philadelphia were Freeport Bahamas, Puerto Colon and Panama City Panama, Callao Peru, San Antonio Chile. It is believed, that seized cocaine was destined for Europe, namely France and Netherlands.
The story sounds like a Hollywood action movie:

Second Officer Ivan Durasevic allegedly admitted to "his role in bringing the cocaine onboard the vessel," the federal complaint said."Upon leaving Peru on this current voyage, he got a call from the Chief Officer to come down to the deck, at which time he saw nets on the port side stern by the ship's crane," the complaint said. "Durasevic and approximately four other individuals, some of whom were wearing ski masks, assisted in the pushing of the nets toward Hold Seven or Eight of the vessel."
He said, according to the complaint, that he was paid $50,000 by the chief officer, who has not been identified.
Another crew member, identified as Fonofaavae Tiasaga, also allegedly admitted to partaking in loading cocaine on the ship, including on a previous voyage, the complaint said.
"Prior to departing on the voyage, the ship's Electrician and the Chief Mate also approach Tiasaga and asked if he was willing to help again," the complaint states. "According to Tiasaga, each of these four crewmembers coordinated individual loads of cocaine."
At least twice while the ship was en route between stops in Chile and Panama, numerous smaller boats approached the Gayane at sea to hand off large bundles of cocaine, the complaint said.

All said above meaning that at least half of the crew were actively involved in trafficking, with the rest keeping their eyes shut, but they had to be on some payroll, also, logically speaking. They had to be greased to keep silence. Is such big-scale operation, requiring complicity of all of mega container ship crew, possible? And for how long could it last, with so many people involved? And why all the trouble of picking up small bundles of cocaine with the use of nets, crane and small local boats?
The whole story sounds strange and smells strange. Nobody can be trusted in drugs either trafficking or law enforcement, not traffickers, nor officers.
Until now, traffickers didn’t bother themselves with crews cooperation, they’ve been shipping cocaine in containers without crews, or ship’s management, or ship’s agents, involvement. It was far more safe and sure way. What changed? 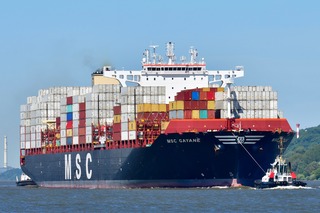