Cruise ship NORWEGIAN EPIC suffered power loss and failure of one of engines on Feb 11, while on Caribbean cruise, had to interrupt cruise and headed for San Juan, Puerto Rico, at a reduced speed. On arrival to San Juan in the morning Feb 12, during mooring, the ship struck two sections of pier, probably because ship’s maneuverability was hampered by engines issues. The ship reportedly, didn’t sustain serious damages, just scratches and probably dents, but pier sections were destroyed. 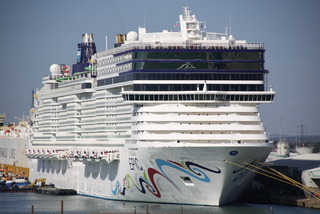