Spanish tug CENTAURUS managed to take MODERN EXPRESS on tow at 1145 CET Feb 1, after turning her around, to head away from the coast, and started towage. The weather is fresh, the speed of the convoy is around 3 knots, the main task for now is to tow MODERN EXPRESS to sea, and wait for weather to improve. Each extra mile between distressed vessel and shoreline increases the chance of successful salvage.

MODERN EXPRESS update morning Feb 1
On a press-conference held by French maritime authorities on Jan 31 vice-admiral Emmanuel de Oliveira, maritime prefect of the Atlantic region, said to media, that at 1400 UTC Jan 31 MODERN EXPRESS was 50 nm west of Arcachon, Gironde, France, Bay of Biscay, drifting in southeast direction at a speed of some 2 knots. Weather conditions didn’t permit salvors to take vessel on tow, the last chance to tow vessel off the coast will be Feb 1. If attempts to take vessel on tow fail, then, MODERN EXPRESS will most probably, ran aground on sandy coast of Landes department. There is no danger of disastrous oil leak, because vessel has on board only 300 tons of bunker oil, authorities already mobilized all ainti pollution resources.
As of 0500 UTC Feb 1, there were no updates, meaning that the vessel was still adrift.
Several ships are engaged in salvage operation:
Spanish tugs CENTAURUS and RIA DE VIGO, chartered by SMIT Salvage;
Salvage tug ABEILLE BOURBON;
French Navy frigate PRIMAUGUET;
French Navy support ship ARGONAUTE.
Previous news: https://www.fleetmon.com/maritime-news/2016/11295/modern-express-update-morning-feb-1/ 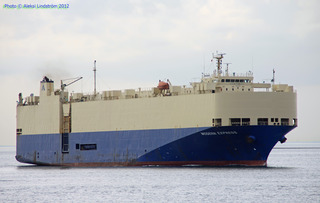